Today we're going to be taking a trip back to one of my first projects from back in the day. For anyone interested I think that day was a Tuesday. My mum let me discover how handy I was coming out of the gate. With almost no prior experience I was asked to build a nice little potting shed. The existing shed was way too small and was in poor condition. What was next? My first demolition project! FYI all pictures taken of the shed on its final day took with this angelic glow about it... as if it knew it was time to move on. 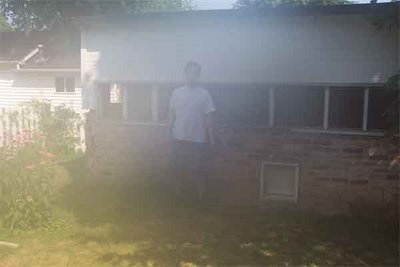 After razing the building the site was cleaned and prep'd for construction. 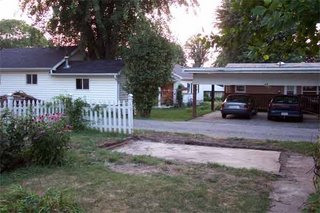 I had taken the week off from work to begin on this cute little potting shed. With my luck it happened to be the hottest week of the year staying in the mid to upper 90's. But I pushed on. I used 6 sona tubes for the forms of the footers to build the shed off of. I had to ensure they where spaced evenly side to side and diagonaly to ensure the building would be square... somehow I managed NOT to screw this up! I then used 5/4" treated decking turned on a 45 to create a fun floor for the space. The 6x6 wood timbers where then used to frame the buildings corners (over the concrete footers). 6x6 where used for their looks and allowed enough surface area for the studs and siding to die into its side.

We had salvaged the windows from another building and had been storing them for some time. The design allowed for us to use these windows... finaly.

I was unable to finish the shed that week and had to return on weekends to complete it. Here stands the shed after a few of those weekends. My sister relaxes on the spacious partially covered porch. Also notice the shovel that we painted and bolted to the door for use as a handle! I thought my mom was crazy... but it looks awesome! 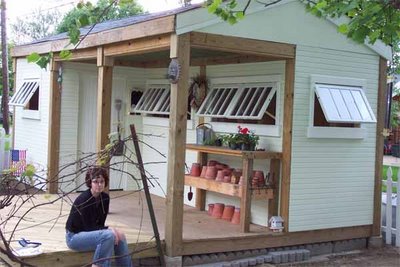 Eventually shelves and workspaces were built into the shed. They were filled up almost instantly. At christmas time I ran some speaker wire out to the shed from the stereo in the house for some sweet tunes while repotting flowers and kickin' back. 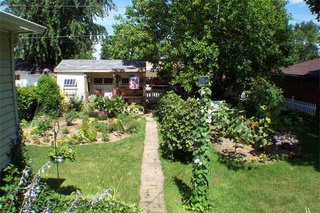