Well it's time I take another go at a raised garden. This time the biggest challenge is not making the garden, growing the crops or harvesting the food but rather keeping out the @#$% squirrels.
I needed a cage that can accommodate the crops, keep out the pests and easily let us in to tend the garden. I also needed to do this on the cheap per usual.
I have seen some websites that use the white pvc to create a rigid frame around their garden but the problem there is white pvc rarely has enough UV protection to keep it from becoming brittle over 1-2 seasons. The main reason is that its generally for below grade applications. In comes the grey stuff. 10' sticks of electrical conduit is rated for both above and below grade! The downside is the selection of fittings available. So, I decided to go sans fittings. Using the heat gun from my kayak building days I created a jig to bend the pvc around. 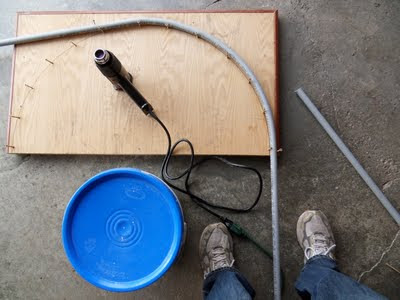 It took some tests but I was able to warm 12-16" of pipe at a time and lay it around the jig (screws in a board) and let it cool. The pipe became very flexible when heated which gives me all sorts of other ideas for other projects. When cooled though it regains its rigid properties. 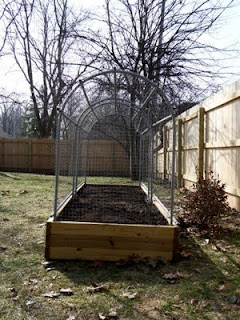 I created a few arches and then laid some conduit horizontally to tie the pieces together with stainless steel wire I had lying around. Then on to wrap everything with poultry netting. I found some in grey to match the conduit. 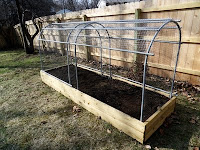 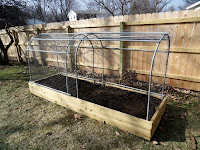 I created 4 "doors" to gain access to the garden. Each door has three levels of openness. 1. Closed 2. Open to 3' high for harvesting 3. Open to 4' high for general raking.

The garden has done great this year. We went through an amazing crop of spinach and are currently enjoying the lettuce. The carrots are on their way and the cherry tomatoes are going crazy! I've since dug up the spinach and planted my first rows of green beans in its place. I will do the same for the lettuce when it is ready. This will spread out my green bean supply through the season. I have some peas that will be planted later in the year when it is cooler.
And while I have kept all the squirrels out (I found 4 playing on the cage one day) there is a little chipmunk who likes to dig in the dirt. No damage to the crops yet but I'm watching you chipmunk!