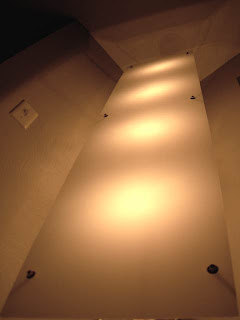 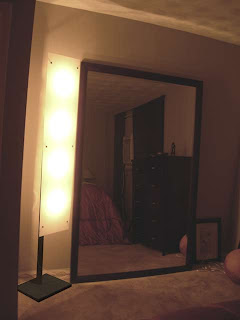 My lamp. I wanted to design a floor lamp for my bedroom. Actually I wanted two of them, but so far only one is built. Someday they will both be built and wired to a common switch. As you can see my lamp stands tall alongside my gi-normous "loft" style mirror. It was interesting wiring this guy up.

Lessons learned this exercise:
1. When you have one small hairlike strand of wire touching a piece of metal when plugging it in, sound, smoke and light make an appearance.
2. I originally "daisy chained" the lights in an incorrect series (only one wire went from a socket to the next socket...out of one socket as a "live wire" into the next socket as a "dead wire") and the output was about that of a match. The reason was the built in resistance of the "lamps" (light bulbs) was added to the resistance of the others creating in this case 4 times the resistance that it normally would have. Trust me I asked an electrical engineer and got all the equations and graphs to prove it!