All it took was a slow trip down a crystal clear river in northern Michigan to convince me that kayaking was for me. After my trip up north I eagerly returned home and began pricing kayaks to only find that the ones I wanted came with a hefty price tag. I could settle for a small generic recreation kayak but I wanted something more.


Searching for hours the internet opened my eyes to an other option that I was not even aware of. I shall design and build my own wood strip kayak!


Once I realized it was possible to build kayaks from wood I began to search for every website that was kayak. The site that sealed the deal was one blue heron kayaks. http://www.blueheronkayaks.com To start with this website provided me a great piece of software that could allow me to design a kayak just for me! Although this helped me through the initial confusion of how design impacted function I did not have the woodworking courage to start... until I found the forum on the site. Here dozens of builders work on and post detailed images of their builds. They toss around ideas, create innovated solutions to problems and comment on posts that asked for help. I finally realized that this may actually be doable.

One comment that everyone starts with on the forum is BUY NICK SCHADE'S BOOK The Strip-Built Sea Kayak: Three Rugged, Beautiful Boats You Can Build

. And so I did. He takes you through fundamentals all the way to a finished boat. After reading the book I begin designing what eventually becomes The White Loon. 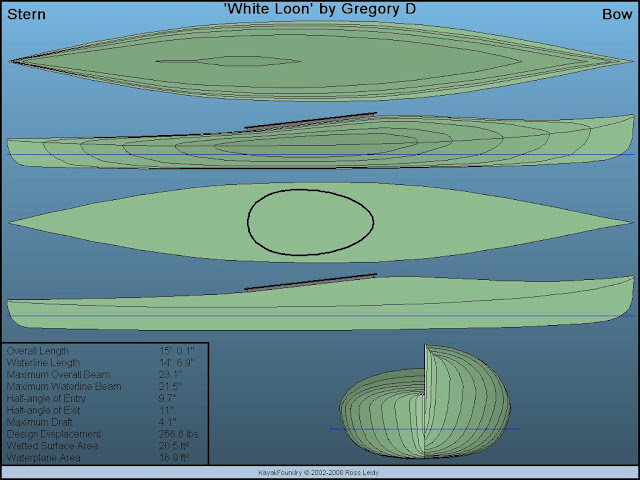 My kayak design was influenced by a few wants and needs. I was always frustrated with kayaks that did not provide me enough leg room. My size 11 feet and longer legs caused my lower body to be locked into position throughout a trip on the lake. I became claustrophobic and sore. To counter this I raised the deck and enlarged the cockpit for easy entrance and exiting. (Note: the taller the deck the more likely you will catch cross winds that can push you off track. Raising the deck may also cause you to hit your knuckles as you paddle.) Another need was for a kayak that could track straight and move fast. To make it faster I pulled in the overall width in a bit. (Note: making it thinner compromises the stability of the kayak.) You can't have super fast and super stable in the same kayak. To make it track straight I wanted to add a couple external stems to the bow and stern. This would act as mini rudders as well as 'rock finders' in shallow water. Just for kicks the third design element was a low flat deck on the stern... no reason except for I liked the lines.

Another helpful tool for me was a plug in for sketchup that took data from the Kayak foundry and imported it to Sketchup. Inside of sketchup you could burn hours upon hours connecting the ribs to form a 3-d representation of your kayak. Thanks Dustin for taking the time to create this script! 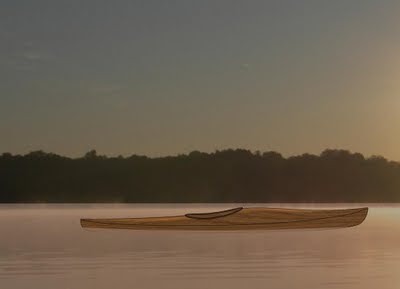 I began to design, post to the forum and create a working budget for the build. The excitement is building!