With the kitchen renovation in progress I thought it would be nice to create a small 18" x 36" play kitchen for my daughter out of some demo'd scraps.

I was able to reuse the counter tops and faucet which really added a lot to the final product. The sink bowel is just a mixing bowl

dropped into a hole in the counter which works great when she's cooking her famous macaroni!

The oven door was made from some old shelving and I eased the edges with a router and insert a small piece of Plexiglas on the back. I found some nifty chrome spray paint to give her a "stainless steel" oven.

There are still a few things I would like to do to it but that is part of the fun. As she has used it for a while something new shows up that makes it that more exciting. 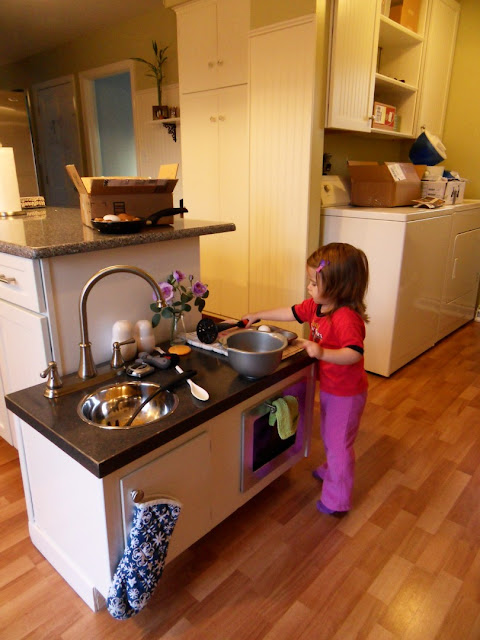 To take my daughters play kitchen a step further I wanted to work in an oven light so she can see what she's cooking.

I knew I wanted a LED light and I needed a way where she wouldn't accidentally leave it on and drain the batteries.

My first thought was using a momentary switch that only completes the circuit WHILE you hold the button down and turns off once you release the button. I used to have a couple laying around but couldn't find them. Being too lazy to run to Radio Shack I went to creating my own out of scrap wood and metal.

The project went quick enough that I didn't take any progress photos and any photo of it installed is too dark inside the cabinet so I put the following section cut / diagram together to hopefully make some sense of it.
I started with a wood block that would be mounted to the inside of the oven. I drilled a 5/16" hole through the block to receive the button/dowel. I drilled another hole from the bottom half way through the block to receive a wire. This wire carries a counterweight that returns the button to a set position whenever you are not using the switch.

that I had laying around and attached a light gauge wire to it that connects to the negative contact of the battery.

I wanted the button to be easy for her to use which meant I didn't want it to flicker if she didn't push the button in all the way. I used some scrap metal flashing to accommodate this which has its own wire running back to the positive contact of the battery. When the button is pushed in halfway the cap connects with the metal and turns on and will stay connected as the button is pushed in even further. The metal has decent memory and springs back to its approximate starting location.

All of this is tied to an LED tap light

that is left on. Works pretty darn good! 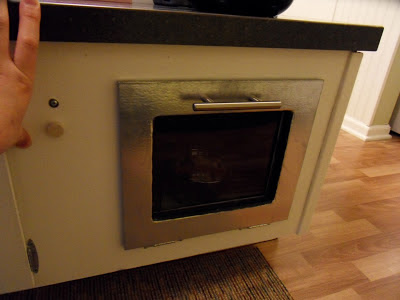 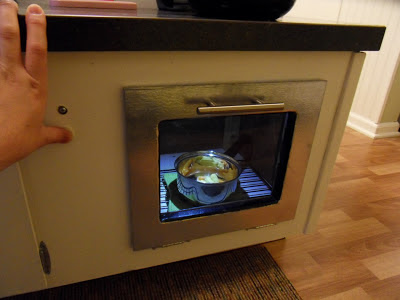