This past summer I decided to overhaul our 55 gallon DIY rain barrel.

I purchased the barrel a couple years ago from a Rural King for $11. It is a food grade barrel and is... bright blue. To start the barrel renovation my first task was to mask that blue with something a little less bold. I have heard of the spray paint you can use on plastics and while skeptical it would work in an exterior application decided to buy a couple cans of it from the clearance aisles of Lowes for about $3 each. I thoroughly washed and scrubbed the barrel to remove any dirt and dust and then did so a couple more times.

I set the barrel out in the yard upside down to make sure the contents were empty. Due to the weather on this morning I didn't know if the existing water inside the barrel would form condensation or alter the exterior face of the plastic that could prevent a good adhesion. Once it was dry I began with the first can. It made it most of the way around the barrel and was surprisingly matching the color of our house about perfectly! I ended up using most of the 2nd can later that day after it had time to cure. 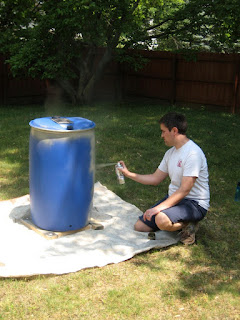 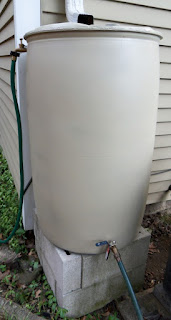 For the hardware I ended up going with a quarter turn valve to replace the brass spigot I had originally installed. The main reason was due to the lack of head pressure in this setup (no pump just gravity) I had to turn the spigot handle in 3-4 complete revolutions to get a decent amount of water to flow. I had to turn it about 6 times to open it up completely.

A few days a week I would make my 4-5 trips to the barrel to fill the 2 gallon watering can and every time I would have to crank the spigot and wait for the water to slowly come out.. The quarter turn valve I decided to use does exactly what the name implies. To turn it from off to completely on you only have to turn it 1/4th of the way around, quick and easy! And even better yet it can move 2 gallons in 5-6 seconds! 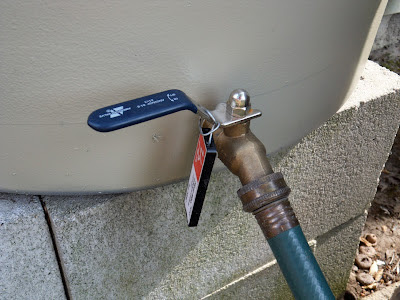 I went ahead and used the spigot for my overflow tap. Typically I would use a cheap pvc adapter but figured I might as well use this since I had it on hand. The hose that connects to the overflow runs to the front yard which then slopes away from the house. 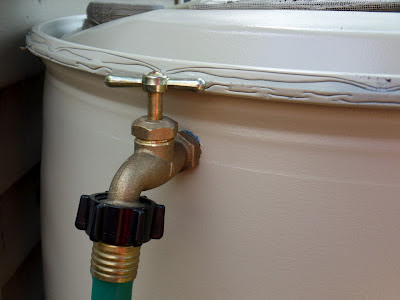 I reworked the top cutting a larger rectangular opening and covering it with a perforated plastic and insect netting. The water from the downspout simply rushes over the opening and any large debris just washes over the side of the barrel. I made sure to cover the other openings as well to keep out the mosquitoes. 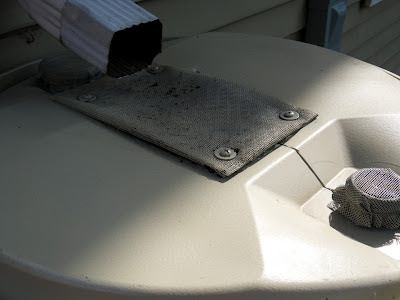 The downspout serves only 600 sf of roof and can usually fill an empty 55 gallon barrel in 15 minutes during a good downpour. I usually can go most of the year and never have it empty. This year was the first time it went dry which was during a long drought we had through the summer. Though to be fair it did last a couple weeks into it!

And seeing as how it's now winter as I write this post I'll say that I usually open up the valves before the first big freeze to drain the water. I've seen what a little expanding water does when it freezes and I don't want it to split my newly refinished barrel in two.

And as for the paint, it has held up perfectly after 6 months of use and shows no sign of failure!