As we wrap up the tile-work in the kitchen its time to start on the next steps. In this 1 day project we convert a base cabinet (door and drawer) into a sliding trash compartment.

I started by removing the existing hardware and separated the drawer face from the drawer (just a few screws). I then laid the drawer face and door on a flat surface, spaced them apart to match the existing conditions and screwed some reinforcement onto the back. I used a cheap white melamine shelf from Lowes. I wanted something that could be easily wiped down since its going to be next to the trash bin. Before I screwed them down I found wood nails just short enough that they wouldn't bust through the face of the doors. Then I pre-drilled the holes and use a countersink bit so the screw head would be flush with the inside. I also had to unscrew and cut out the horizontal face frame that separated the drawer from the door below. 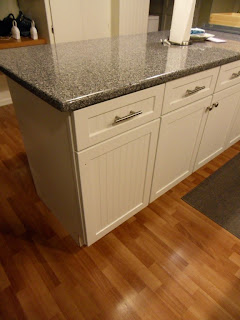 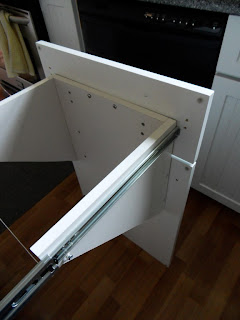 I made two triangular shapes to brace the door back to the drawer pulls. Again I pre-drilled and countersunk the screws.Think through ALL of your dimensions (trash bin, cabinet opening, drawer slide width, support arm thickness and you shouldn't have any problems. 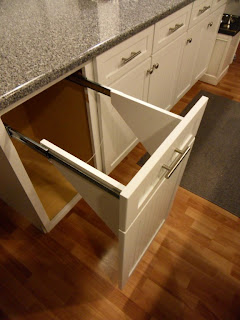 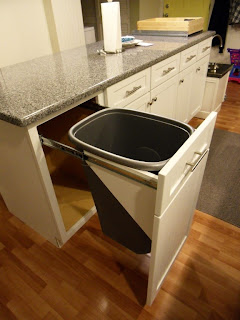 The drawer slides are a new product at Lowe's that support 75 pounds and has that auto-close feature that's all the rave. For under $25 I thought I'd try it out. They aren't the most luxury slides and take a little extra pull to function but for the price they work for me.

I added a string to the back of the trash carrier to keep the bin from sliding when its opened quickly. Nothing too fancy here.

Oh yea, the best part is I now have an extra drawer box and 2 drawer glides that I can add to one of box cabinets for pull out access! Not too shabby!