Over the past few years I've developed a liking for wine so when my friend mentioned making his own wine it didn't take long for me to join him. For my first batch I went cheap and simple. I dropped $35 for the equipment and $4 for some unpasteurized apple cider. If the batch (1 gallon / 5 bottles) didn't go well I'm only out $4 and will try again. My friend went with a 6 gallon (30 bottle) batch.

Making your own wine (not from a box kit) is a little overwhelming so I decided to be a little less scientific as a test to see if I could just wing it. I figured if I could take the science out and bring in some "art" it would make it more fun in the future. The result was drinkable wine but it fell far short from the apple cider wine my friend made (which was by the books). 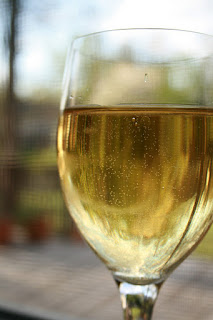 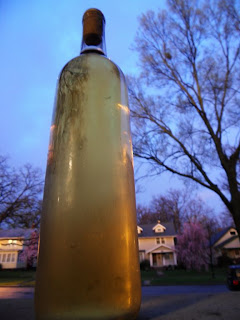 For my second batch I went with blueberries, handpicked by me and my wife. I approached it more scientifically this time but found a new challenge. As the crushed blueberries broke down in my primary bucket they released more sugar than I had anticipated. I lost control of the sugar levels a couple times and had to restart the yeast and make changes to try to equalize it. In the end I'm guessing the levels rose again and killed off the yeast stopping the fermentation process. A couple months after bottling I took a taste. Tasted like juice with zero alcohol. 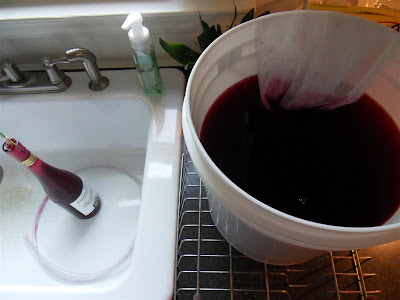 I thought I'd take some time off from wine for a while. My friend continued to start a couple batches, one blackberry and one Washington Riesling (box kit). When he decided to quit his job, home and hike the Appalachian trail in 2011 I swept in to save his 6 gallons of Washington Riesling before he dumped it. After bottling, aging and sampling it I realized I wasn't about to throw in the towel just yet.

Well after a break I've decided to start a batch of White Zinfandel (box kit). So far so good. I'm going by the books being extra careful about everything. It's bottled and in a month or so I'll sample one of the 30 bottles. I've also decided to start labeling and holding onto a few bottles to begin a collection rather than polishing off one batch and starting another. We'll see where that takes me.