Trying to figure out how to brighten up my basement I built a faux rail and stile wainscot. Wanting to keep it simple and cheap (less than $1 per linear foot) I decided to just paint the wall instead of building plywood / mdf panels. The design needed to address 2 electrical outlets that were already in the wall and projected out from the wall about a 1/4". These would be my control points when coming up with a layout. As for the size/height of the rails and styles it was a little less scientific. I was able to utilize cheap help in trying different things while I stood back and decided what just looked better. 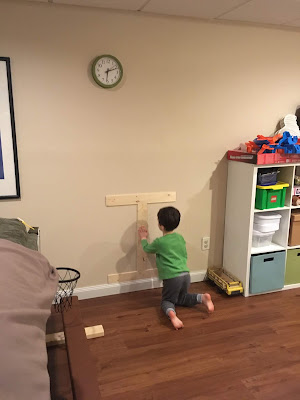 I'm always looking for ways to save a buck and when I found 6-packs of rough finish C-Grade tongue and groove pine siding on sale I knew that was for me. Luckily they were in clear shrink wrap packaging and I could see that probably half of them had terrible knots or were split/broken. I bought twice as many pieces as I needed knowing the rest would be fire wood. Remember this entire project was under $25 so I wasn't too worried about the waste. I did have to cut both the tongue and groove off of each piece and sand like crazy which created a little extra labor.

What is missing from the photos is how I adhered / fastened the rail and stiles to the wall. It involved propping random objects against the trim while using a roll or two of painters tape. A note to make about my basement. Anything within the first 4 inches from the floor up is generally a pvc product in the event I get water coming into the space. I also cut the drywall a little high around the perimeter so it doesn't wick the water up into the wall. 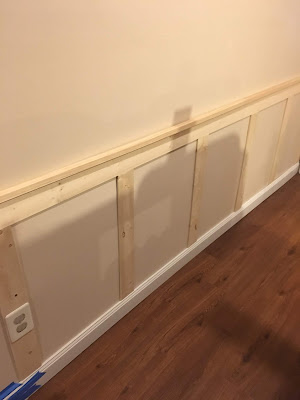 Look at that! It was like it was meant to be. The stiles fit just perfectly around the box with a little help from my scroll saw. 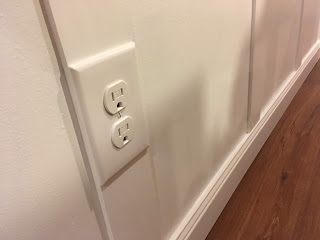 I used 3 coats of trim paint which was also on sale for about $10/gallon. It went on well but I may need to do a 4th coat at a later time. 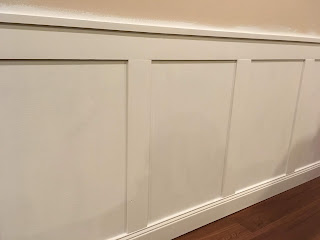 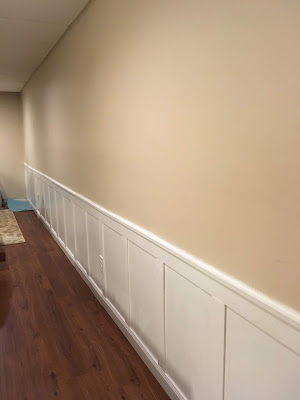 Now to hang some art on those walls and move the furniture back in.