My quest for building materials commenced immediately. Once I made my calls around town looking for clear cedar I branched out further until a call landed halfway across the country. By now I had ruled out cedar due to its limited availability. I found some 6-8' pieces but that would have required many scarf joints that I was not willing to do. What seemed like the next best option for me was to use pine. Pine is approximately 33% heavier that cedar (depends on who you ask and what day of the week it is) but I figured I could cut the wood 25% thinner and break even on weight.


My plan was to only invest as much as I need to continue the build. The Pine was 25% the cost of the entire project and the resin/fiberglass was 40% of the cost. So keeping those big expenditures toward the end gave me an out if I thought I wasn't able to continue. As it turned out I never thought twice about giving up! 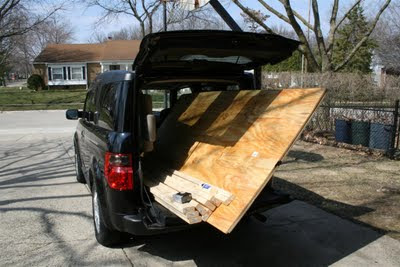 My first trip and purchase was some lumber to start making the forms to build my kayak around. First I had to make 3 stands to carry the kayak throughout the next few months. With a few 2x4's I made three "stackable" stands. The top bar is held on by only a couple screws. The plan is to move the top bar down later and install a rope across the top. This will cradle and support the boat. To do it again I would have made the supports a bit wider than the width of the kayak. 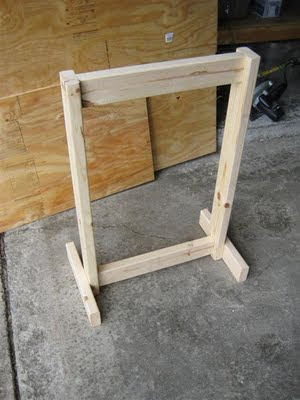 Using the software I was able to print out the forms that I began to refer to as the 'ribs' of the boat. A few key things to consider at this point is looking at the form where you will be sitting and the form where your feet will be within the boat. This will give you an idea if you will fit comfortably in the kayak. I layed one of the forms down on the floor and stood on it with shoes on to see how much room I have. Once everything checks out it is time to glue the paper forms to your 1/2"-3/4" plywood.


As you are gluing the paper to the plywood another thing to consider how big the strongback will be. The strongback is the 'spine' to the 'ribs'. Ideally you want to maximize this member to prevent bowing but you have to remember this strongback needs to pass through almost every single rib. Here I took the 2nd form and the 2nd to last form and laid them next to each other to see how large of a strongback I could create without pushing through the edge of a rib. Note there are a few lines that get printed onto the forms. The upper horizontal one is the 'sheerline' which represents the widest part of the boat. This is important since you will be making the kayak in two halves and in order to remove the form you must start each half from this line. The lower horizontal line is the 'displaced water line'. This shows you the calculated level that the water will rise around your kayak when you are sitting in it. If anything it helps you develop your design if you want special boards to play with the waterline.To find how large of a strongback you can build align the lines and find your rectangular profile that fits in both shapes. Once I have this shape I trace it onto all of the forms. 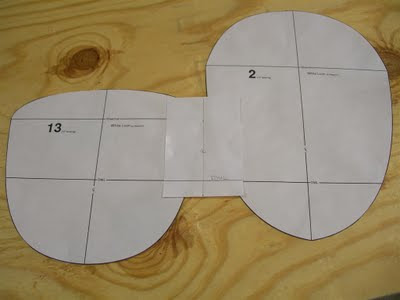 After gluing the forms down you cut the strongback opening out and then cut the form from the plywood. 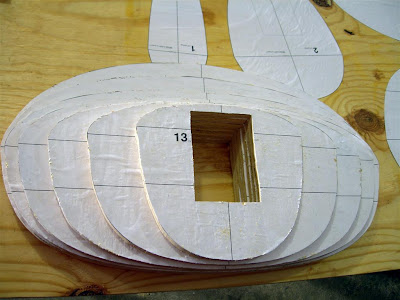 For the construction of the strongback I used 1/2" plywood. I overlapped the edges, glued them, checked to make sure everything was flat and then used my nail gun to hold them together. 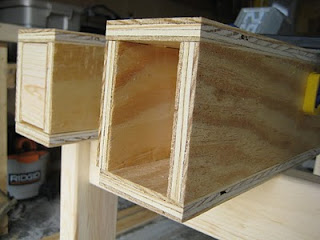 I then figured out how long of a strongback I needed. Knowing a couple forms extend beyond the strongback I knew it was going to be less than the overall 15'. I made (2) 8' strongbacks, fastened them together and then cut the end off. I was fortunate to have a 3 1/2"x2" interior opening within my strongback so I was able to use a 2x4 with a 1/2" plywood scrap to slide inside both strongback ends and then screwed them all together. This kept the strongbacks even to each other. (Note: I ended up using the left over strongback assembly for something down the road. You may want to hang on to it.) 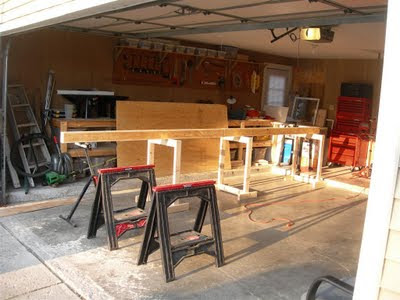 I slid the forms onto the kayak and check to make sure they were true to each other. I want to make this thing as symetrical as possible! I happened to have a laser to shoot across the top. A string works just as good. 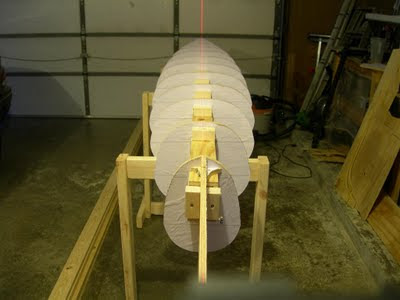 Here I temporarily clamp the bow and stern forms to the strongback. (Note eventually I will cut a 1 1/2" sliver off of the ends forms to use as a permanent internal stem.) I think this form is awesome looking!