I decided to start stripping on the bottom of the boat. This helps me work out the kinks of how to make everything look good before I start on the upper deck, the part you'll see when paddling. So with the forms upside down I attach the 'L' brackets at the shear line (widest part of the boat) this provides an area to rest the first strips on. Putting the first strip is such a welcoming step after all the preparation spent just to get here. Typically I would glue one strip to each side of the kayak and then wait for the glue to cure but since there is nothing to glue when you start you use 2 strips per side. (Note that I wrapped the edges of the ribs with duct tape so the wood strips would not adhere to the form... that would be bad) 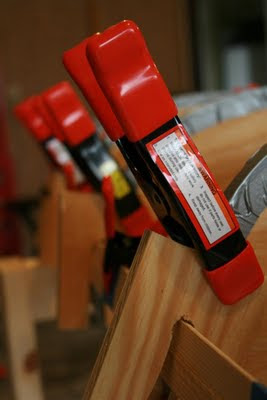 Since I've never built a kayak before I could not anticipate what challenging situations I would be getting myself into. I was pleasantly surprised that when you take it 1 strip at a time, you can solve any problem sometimes without even knowing there is a problem to begin.I place the rounded edge facing down for two reasons. The amount of pressure pushing down would tear up the weak ends of the coved side. Having the cove side facing toward the ceiling gives you a channel to lay a bead of glue down inside of it. Then I put the second strip on top of it using the 'U' helpers to hold it firmly against the ribs and the strip below. You will find yourself using clamps, rubber bands, bungees, tape and anything else available to hold them in place as the unique situations arise.


Working from one side to the other allows me to make sure the kayak will be built symmetrical physically and visually. It also lets me place planks cut from the same board opposite of each other since some boards will be darker or lighter. It's also important to build on both sides simultaneously so one side doesn't start pulling the bow or stern to the left or right. 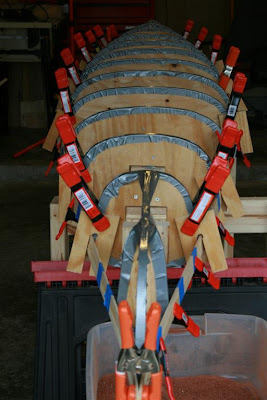 I wish I had a good photograph of the end forms, the bow and stern that run parallel to the kayak. Like I mentioned before, I cut a 1 1/2" sliver off the ends of the forms from the tip to the underside of the curve, I then temporarily reattached it back to the form and beveled the ends of the sliver to accept the strips as they run by. It makes it so easy if you can glue the strips to this 'internal stem' and just cut the strips as they run by. If you look below I would run a few past and later would come back and knock the ends off to make a clean end. Of course this means I will be putting an 'external stem' to cover up and reinforce the end. Having both makes for a good defense against rough obstacles. 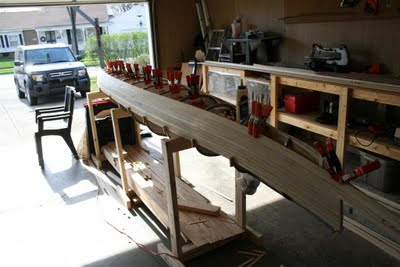 Closing up the bottom slowed progress down since I only had enough room to do one side at a time. 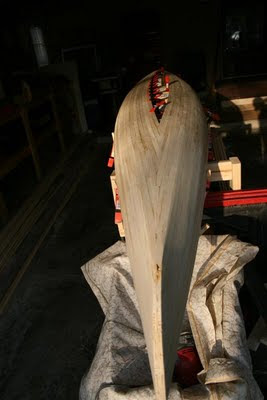 I sanded her down real smooth to eliminate saw marks, rough edges and burn marks. 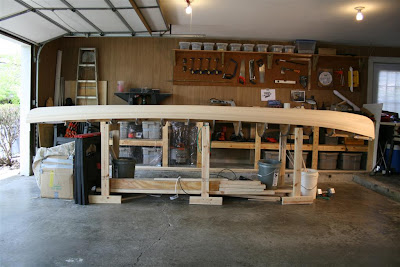 Here you can see the end of the bow before I build the external stem. 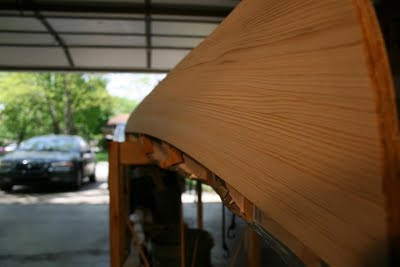 Here is a shot of the sanded bottom. 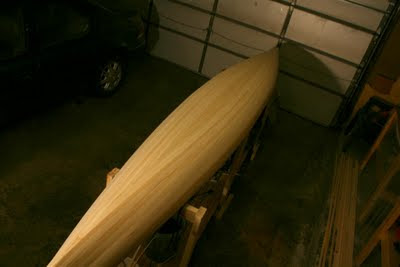 I ran a few tests and found if I bend and laminate a few boards together, in this case bubinga, pine and another layer of bubinga it adds a nice accent to the ends. Then I shape it to run flush with the kayak sides and round over the edges to make it look amazing. 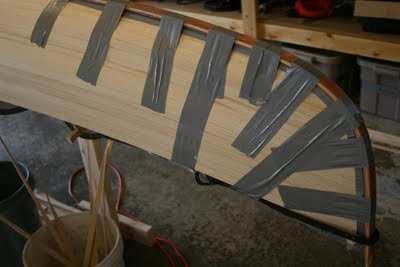 Bubinga is stuburn and I probably won't use it again. I pushed it to its limits here by using a heat gun to give me a few extra degrees of bending. The pine was easy once I soaked it in water for a while. 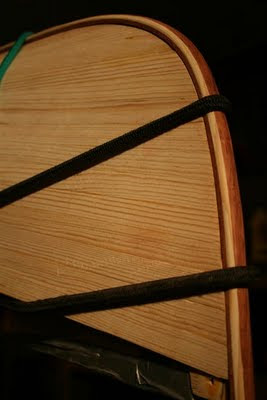