I definitely developed a renewed love for pine once it was under a coat of resin. Having never used resin or fiberglass prior to this project I charged ahead, and learned a few lessons of which I'll share below.
I had to glass the bottom half before working on the top since the wood glue was only going to hold for so long. I went against the forums and with the books. (Yea, not sure why) I laid the fiberglass directly onto the sanded pine and poured resin from above. It was about 85deg.F when I started pouring the RAKA resin on to the cloth. I was having a slightly difficult time getting the resin through the 6oz glass evenly and my first reaction was to add more. Not a great move. As it sat there in a slight puddle it warmed up and 30-50 minutes later I noticed there was a 'bold' contrast in the wood color and grain. I was able to make it work this time, but it was not the look I was going for. I'll show you what a different approach looks like when I get to the top. 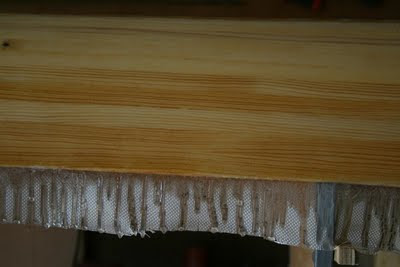 I put two coats of resin on the bottom before trying to cut off the excess fiberglass. (Note: I should have trimmed the excess cloth after the first coat... two layers made it difficult to cut through. Three would have been quite a challenge.) 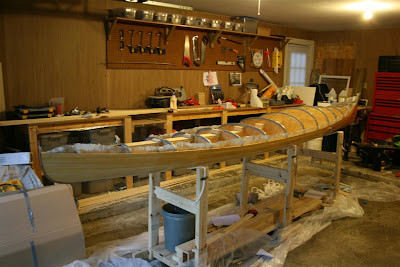 Later when it was time to glass the top I tried a different approach. I started by putting a thin coat of resin on to the bare sanded deck and let it absorb evenly across the kayak. While it was still a little tacky I threw the fiberglass on. I had a moment where I nearly freaked out since the fiberglass began to stick to the deck quite a bit. I was not able to lay it on smoothly at first and it had many wrinkles. I wish I had another set of hands at this time. After sweating off 10 pounds through the process and reassuring myself it would all work out I was able to work the cloth and stretch it beautifully across the kayak. Then I put another light coat on top of that. This time the result was a very light and consistent wood with nondescript grain!!! This is how I would glass the insides later.
Also, you will want to put the resin on as the temperature falls so the wood pulls the resin into its pores instead of giving off air bubbles.
I have never seen a post on this but at least for the resin/hardener I used, if there is resin that pools or sits at the bottom of your mixing cup for so long it gets HOT!!! I mixed my usual batch 3/4 cup or so for some light touch up and some side experiments. 3/8 of a cup remained in the mixing cup for about 10 minutes without me stirring or using any... I went to pick it up and could not for the life of me tolerate the heat it put off! The mixing cup started to actually become softer on the outside due to the heat. Then the mix started smoking! It was pretty intense. I should have mixed a smaller batch, or poured the excess out of the cup. Instead I had to throw away the cup and buy another.

I am horrible at putting finishes on anything. I think it’s my lack of patience to put on thin coats and sand between coats if necessary. When I put on a heavier coat, not only does it puddle but I'm guessing the puddle actually gets hot over an hour or two or three... which could potentially affect how it is absorbed on your first coat. At the least I've noticed mysterious runs in the resin 5-6 hours after its been sitting perfectly flat. Take your time.