With the two halves fiberglassed inside and out it is time to join the two together. The wood spacers seemed to help the kayak keep its shape while curing. Only a few areas needed to be forced together. As I aligned the pieces I used duct tape and bungees to hold them together. I worked my way from end to end doing my best to eliminate the gap between them. 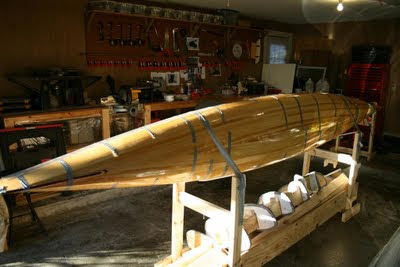 I ran a length of tape down both exterior seams. I will be joining the halves from the inside first and the tape will prevent resin from dripping out between the two halves. 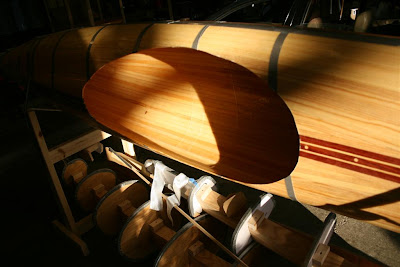 To be honest this was the part I dreaded the most from day 1. The thought of climbing into my kayak head first with a brush at the long end of a 5' stick trying to apply resin in the dark surrounded by fumes. I thought the kayak could become a temporary casket if I were to pass out. Well, as it turns out this was one of the most fun steps in the entire process. I'm not sure why but the fumes may had something to do with it?

Since I had ripped the strips so thin I had noticed the sunlight coming into my garage was actually causing the kayak to glow inside. I pushed the kayak closer to the open garage door and climbed in. It was surprisingly roomy and I was able to apply the resin along the seam and roll out the 3" fiberglass strip all the way to the end. Being inside a piece of woodwork that you've spent months looking at from outside was very surreal. I liked it! 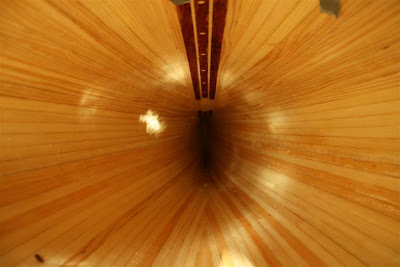 Once the inside tape was cured I pulled off the outer layer of duct tape and cleaned it up so I could tape the outside seam. The seam was a little rough and the two halves had a slightly different appearance due to the glassing process. To further marry the two halves I decided a dark thin strip would be a nice touch to hide my errors and give purposeful connection between the two halves. Plus racing stripes make it 5% faster! For anyone interested in the stripe I chose not to buy marine tape but rather dark brownish/red electrical tape! Ha! after a couple coats of resin it was safely preserved below. 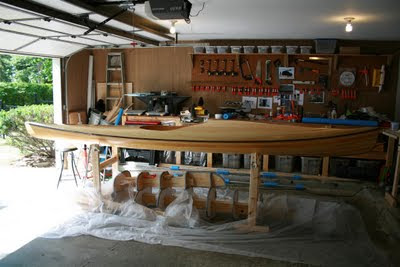 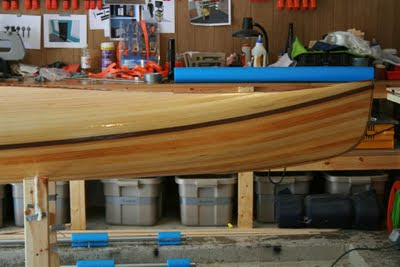